A digital look inside the human eye – when algorithms diagnose Diabetes

Diabetes mellitus or simply diabetes has become very common and is often described as a lifestyle disease. More and more people are suffering from this chronic metabolic disorder. Next to established diagnostic procedures, digital retinal screening has shown to be successful - a promising technique that will also play an important role in the diagnosis of other diseases in the future.

Regardless of whether it’s type I, type II or even the rare type III - the latter is due to causes such as viral infections, genetic disorders, drug treatment, alcohol consumption, metabolic disorders or chronic pancreatitis- , diabetes has serious implications for a person's health. Early detection is crucial to prevent further health problems. To find out whether they are affected by diabetes, patients must undergo several tests including a fasting blood glucose test, an oral glucose tolerance test, a random blood glucose test, a hemoglobin A1C (HbA1c) test, and antibody testing. Meanwhile, digitization continues to transform medicine in the 21st century. Artificial intelligence (AI) and big data are revolutionizing personalized medicine, also known as precision medicine. The Medical University of Vienna is now developing a method for the precise and rapid diagnosis of diabetes mellitus based on AI.

OCT produces 40,000 scans of the patient's retina within 1.2 seconds. These are high-resolution retinal images with two million pixels showing various changes in the retina and its vessels.

Digital retinal imaging is a procedure that can detect diabetic changes within a few minutes. Based on optical coherence tomography (OCT), 40,000 scans of the patient's retina are acquired within 1.2 seconds. These scans are high-resolution images of the retina with two million pixels. The procedure scans various changes in the retina and its blood vessels that are tied to the respective stage of diabetes. A distinction is made between nonproliferative and proliferative diabetic retinopathy. In the case of the former, the scans detect the microaneurysms or microscopic blood-filled bulges and vascular occlusions of the retina that are symptomatic of this stage. They also show swelling of the macula and fluid accumulation in the adjacent tissue, which are a result of the permeable capillary walls. Proliferative diabetic retinopathy reveals hemorrhages and edema within the retina. These form when new vessels, which have grown due to the deprivation of the retina, rupture. What’s more, the scans can detect retinal holes and tears that are a precursor to retinal detachment. Automated algorithms then analyze the data from the scans by comparing them to healthy people's normative values. Deviations are indicative of the disease. The automated algorithms are based on the courses of disease of other patients, which have been ascertained over a specific period of time. The algorithm uses this foundation to determine individual disease progression for each new patient.

This makes a blood draw that is still needed with the conventional tried and tested methods unnecessary. What’s more, the patient also receives an accurate diagnosis indicating the stage of diabetes within a few short minutes.

Very soon, the condition of the retina will also disclose diseases of internal organs, such as the kidneys, age-related issues and neurological disorders. Together with retina specialists, Martin Hülsmann, a cardiologist at the Medical University of Vienna (MedUni Vienna) and the German Chamber of Commerce in Austria (Vienna), has been working on clinical studies for many years. He is interested in how the algorithms can be used to provide an accurate assessment of cardiovascular status based on retinal vascular changes. Digital retinal screening could help provide a diagnosis long before the disorder occurs. 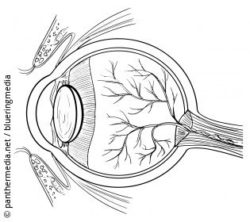 Digital retinal screening is an important step in the development of precision medicine.

Professor Ursula Schmidt-Erfurth, Head of MedUni Vienna's Department of Ophthalmology and Optometrics and physician in charge of establishing AI-powered eye diagnostics holds several patents for digital retinal screening algorithms. "AI medicine is 'super human’. The algorithms are quicker and more accurate. They can analyze things that an expert is unable to detect with the naked eye," says Professor Schmidt-Erfurth. Having said that, AI could never fully replace a doctor and only serves as an aid and supplement. It supports physicians in delivering a faster diagnosis and in making accurate and personalized care and treatment decisions for patients.

Nonetheless, some patients are worried about becoming a "transparent patient" and thus don’t want to undergo the exam. The scans are at risk of manipulation since the screening method is digital. This is where research and hospitals are tasked with taking responsibility and conducting regular maintenance of the medical equipment and developing security systems that protect from cyberattacks and manipulation. In doing so, they ensure the protection of patient data.

That said, the advantages of digital retinal screening far outweigh any disadvantages. And besides, medicine has not tapped into the full potential of this screening method yet. Future studies are meant to assess and show other diseases that can be diagnosed with this process. But one thing is for sure, digital retinal screening is a significant step forward in driving the development of precision medicine.

The article was written by Diana Heiduk and translated from German by Elena O'Meara.
MEDICA-tradefair.com
Exhibitors and products related to instruments and apparatus for ocular diagnosis can be found in the MEDICA 2018 catalogue!

Read the article about smart support for diabetics here