Neurology: Early detection of Parkinson’s disease with app and data?

Big Data is often likened to finding the proverbial needle in a haystack: Large volumes of data contain patterns that hold the answer to a particular question. The trick is to gather meaningful data and identify patterns. The iPROGNOSIS research project shows how smart devices and an app team up to automatically collect data without disturbing the user. 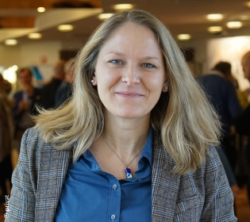 In this MEDICA-tradefair.com interview, Dr. Lisa Klingelhöfer talks about the European project, which aims to harness big data and smart devices to facilitate the early detection of Parkinson's disease.

Dr. Lisa Klingelhöfer: At the heart of the project is a smartphone app that is being developed by our consortium. It aims to detect and measure the motor and non-motor symptoms of Parkinson's disease. This does not require any extra active involvement of the smartphone user and takes place while he goes about his/her everyday life while using the smartphone. In doing so, we hope to identify individuals who experience early symptoms of Parkinson's disease, prompting them to consult a physician at a much earlier stage. We collect this data during the GData phase, which stands for "general usage data" and has been in place since May 2017.

What data do you aim to collect with the iPrognosis app?

Klingelhöfer: A main symptom of Parkinson's disease, which has many effects, is bradykinesia and hypokinesia, slowed movement and reduction in the size of movements. A specially developed keyboard within the iPrognosis app measures the speed, regularity and pressure the user exerts to switch between keystrokes when typing messages for example. A gradual slowing down of movement might also cause a reduction in distances an affected user covers each day. That’s why we also conduct a distance analysis. There is a decrease in facial expressions as well. Especially with the younger generation, we can analyze this via selfies, which might make this an important function as it pertains to generational change. Another main symptom is tremor, which we measure via the smartphone's acceleration sensor every time users hold the smartphone when they make a call or type messages for example.

Parkinson's disease typically also causes speech to be more monotonous and softer. That’s why we conduct a voice frequency analysis during phone calls, without being able to understand the context of the conversation.

Lastly, we also try to monitor the mood of the user, because scientific studies have shown that the onset of Parkinson’s disease is often preceded by depressive mood disorder and depression. To analyze messages, we have developed a kind of dictionary to encode words with numeric values. Neutral words like "tree", "car" or "bottle" are valued at "zero", while emotional words are either given a positive or a negative value. This adds up to a numerical code from which we hope to identify a change in emotions over time.

Our smartphones collect and produce a lot of data, even without us doing anything. While is unwanted or even potentially harmful in certain situations, it will create a large, diverse dataset in the iPrognosis project.

How does the project continue after this stage and how is the collected data being used?

Klingelhöfer: In the second phase of the iPrognosis project, the SData phase or "specific data", interested participants from the GData phase will be medically evaluated by a neurologist for indications and signs of Parkinson's disease. The SData phase started in March 2018.

During the SData phase, we add other "intelligent" devices to the smartphone. We aim to study eating habits with the help of a smartwatch because we suspect that these are also affected due to the motor impairments related to Parkinson's disease. We also want to monitor sleep behavior and look for signs of insomnia as a non-motor symptom.

As part of the iPrognosis project, we developed a new smart belt. Our goal is to monitor the activities of the gut and digestive system both acoustically and electrophysiologically. It has been documented that in some instances, the disease might originate in the gastrointestinal tract before spreading to the brain via the vagus nerve. There are also changes to the gut microbiome. We also know that Parkinson's patients tend to be more affected by constipation and gastrointestinal motility disturbance. As part of the iPrognosis project, we also want to embark on scientific research to determine whether these changes can be externally detected acoustically and electrophysiologically.

The third and final phase of the iPrognosis project is the intervention phase, during which we intend to implement - among other things - standard treatments such as physiotherapy, occupational and speech therapy as "games" on the computer, the smartphone and tablet computer, enabling Parkinson's patients to embark on these therapies on their own at home in an interesting and playful manner.

This is the "iPrognosis" app.

Is there anything special app users must do?

Klingelhöfer: No. The iPrognosis app is a free download from the Google Play Store and works on all Android smartphones. The general usage data is automatically collected, but only after users "sign" a consent form, which is standard procedure for scientific investigations. Anyone who is interested can download the iPrognosis app. They will find interesting information in the participant portion and will be able to activate the iPrognosis app by giving consent to start monitoring if they are interested. The collected data is encrypted and automatically sent anonymously without user or smartphone identification to a secure cloud. Users can specify in the app whether they want feedback. In case of any noticeable problems or changes, the iPrognosis app will alert the user to either contact us at the medical center or get in touch with a registered neurologist for a medical exam. Contact details can also be found in the iPrognosis app.

What is the physician’s role in this process?

Klingelhöfer: The physician examines whether there is any disease indication of Parkinson’s disease or any other diseases that include tremors for instance within the context of the user survey and a neurological exam. In doing so, our primary goal is to determine whether the app is indeed able to capture the big picture and whether it presents a way for people with symptoms that are indicative of a disorder that affects movement such as Parkinson's disease, to consult with a doctor at an earlier stage.

The benefit of the iPrognosis app is that user behavior is monitored in everyday life and over an extended period with the help of the smartphone. When neurologists examine a patient for half an hour or an hour at a clinic, we can usually only take a snapshot. Meanwhile, a smartphone or smartwatch generates an extended and potentially more accurate representation of everyday life to facilitate an early detection of symptoms. From a motor perspective, Parkinson’s disease becomes evident when 70-80% of the dopamine-producing neuron cells in the brain’s substantia nigra (black substance) have already died. Needless to say, at that particular point, the development and use of neuroprotective and disease-modifying treatments are no longer or only marginally promising. That is why the early detection of Parkinson’s disease is a primary goal of the scientific community. Our iPrognosis project aims to help identify those who are affected at a much earlier stage and ensure earlier access to regular check-ups and medical care.

The interview was conducted by Timo Roth and translated from German by Elena O'Meara.
MEDICA-tradefair.com
You can find exhibitors and products from telemedicine, apps and wearable communication devices at MEDICA:

Who makes the best app?