People who suffer from partial or total loss of vision caused by illness must use assistive technology to replace their sense of sight. In recent years, implants offered hope of restoring limited functional vision. Now an innovative microchip designed to help with age-related macular degeneration (AMD) is currently undergoing international testing. 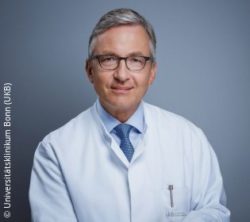 In this MEDICA-tradefair.com interview, Prof. Frank G. Holz explains how the retina chip works, describes how it is implanted and reveals how patients can learn to use the device to enjoy newfound vision.

Prof Holz, how does the retina chip work?

Prof. Frank G. Holz: Some eye diseases and disorders cause retinal cell death. If these are nerve cells, they are unable to regenerate once they die. The death of nerve cells is one of the most common causes of age-related macular degeneration (AMD). AMD has two types: Wet and dry AMD. Neovascular (wet) AMD can be treated with repeated anti-VEGF antibody injections given into the vitreous of the eye. Unfortunately, as of now, there is no treatment for the dry, atrophic type of macular degeneration.

This is where the retina chip comes in: It is implanted as a medium at the spot in the retina that has the sharpest vision, where the outer retinal layers have already degenerated. There it captures light stimuli and converts them into electrical signals, the same way the natural retina works. The chip can partially restore vision in this part of the retina.

What makes the chip so special?

Holz: The chip uses photovoltaics as an energy source. Previous generations of retina chips had a power cable that exited the eye. This approach proved a failure and was subsequently abandoned. The photovoltaic effect converts light directly into electricity. An external camera collects visual information and projects it onto the chip, which converts the information into electrical signals.

Products and exhibitors related to the topic

Discover more interesting products and exhibitors in the database of MEDICA 2021:

Prof. Frank G. Holz, Chair of the Department of Ophthalmology at the UKB, (in the middle in front of the surgical microscope) implanted the electronic retina chip as retina surgeon together with his team at the UKB.

How does the implant procedure work?

Holz: The process involves microsurgery. The surgeon enters the inner lining of the eye at the edge of the cornea where there is no retina. A small opening is made at this point through which the instruments are placed inside the eye, including a light conductor, an inlet to substitute the volume, and all other required devices.

The first step of the surgery pertains to the removal of the so-called vitreous body. The surgeon makes a small incision through the back of the retina outside of the point of sharpest vision. The chip is then directed under the retina with a special shooter. This shooter is activated outside of the eye. This pushes the chip forward in a cartridge. Once it has been accurately placed under the center of the retina, it is fully released from the shooter. The latter is subsequently slowly removed again. Using so-called heavy water, the retina is attached where the electronic chip is now located to prevent it from shifting.

The chip is located exactly in the central point in the retina that produces the sharpest vision. Finally, a tamponade is inserted, which is either a silicone oil or an air-gas mixture. The air-gas mixture is reabsorbed. After about four weeks, the silicone oil is removed. Patients can now start training and learn how to use the chip.

What does the training after the surgery look like?

Holz: Training takes a year, involving either weekly or biweekly sessions, because the chip requires individual adjustments. The patients wear glasses with built-in electronics and must learn how to use them. The glasses include a built-in camera, which captures an external image. This is translated into light pulses, which are transmitted to the chip. The chip turns the light pulses into electrical pulses, which are sent via the nerve tracts to the brain’s visual cortex in the central nervous system to process the information.

The interview was conducted by Kyra Molinari and translated from German by Elena O'Meara.
MEDICA-tradefair.com