The risk of infection with SARS-CoV-2 is particularly high indoors. This is because, in addition to smear and droplet infection, infection via aerosols that accumulate and spread in the air is also possible there. Sufficient air exchange or air purification help to prevent this. The protective canopy developed by Fraunhofer IBP also follows such an approach. 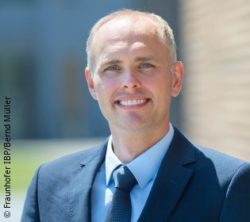 In an interview with MEDICA-tradefair.com, Dr. Victor Norrefeldt talks about how the protective canopy works, to what extent it is more comfortable than shock ventilation and why it should also be used beyond the pandemic.

Dr. Norrefeldt, how does the protective canopy work? To what extent can it protect against infection with Covid-19 and thus prevent the virus from continuing to spread so rapidly?

Dr. Victor Norrefeldt: The protective canopy is a retrofittable, self-contained ventilation device that provides purified air, for example at a seating area. In order not to have to interfere with the rest of the building's ventilation concept, the protective canopy operates in recirculation mode. This means that the unit draws in room air, filters it and feeds it back above the person sitting or standing there. This creates a protective air curtain. Filtering is carried out by a class H14 filter, which also captures aerosol particles relevant to a Covid-19 infection. A large outflow area ensures that the person under the protective canopy does not perceive any drafts, i.e., does not "get a draft," since the overall airflow velocity is low. As a retrofit solution, the device only requires a normal 230 volt power plug and can therefore be easily integrated into existing room or furnishing concepts. 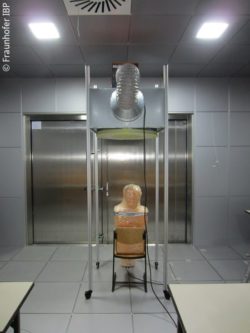 The protective canopy developed by Fraunhofer IBP prevents infection with Covid-19 in the workplace.

How is this more effective than, for example, shock ventilation? What is the added value of the airlock?

Norrefeldt: Shock ventilation exchanges the air in the entire room in a short time and thus reduces the concentration of potentially infectious aerosols in the air. However, this requires appropriately large, openable window and door areas. During shock ventilation in winter, cold air flows into the room, which leads to a considerable loss of comfort in case of permanent exposure. The protective canopy pursues a local protection concept in which defined work or occupied areas are specially protected. Due to the implemented recirculation concept, the air is led to the user with the temperature of the surrounding room air. This means that there is no loss of comfort, such as cold drafts caused by window ventilation in winter. In addition, of course, one will still need a supply of outside air to the room.

Where are the areas of application for the protective canopy?

Norrefeldt: The protective canopy is particularly well suited when special workplaces or waiting areas are to be protected. A good example of this is a supermarket checkout or reception area. The employee sits here for a long time and is exposed to the air in the room, while customers spend only a comparatively short time in this place. Here, the protective canopy can provide the cashier with purified air, significantly reducing the risk of infection from a potentially infectious customer coming near. We also consider protective canopies to be suitable for use in factories, workshops or general workplaces that require human presence.

More topic-related news from the editors of MEDICA-tradefair.com:

The protective canopy draws in room air, filters it and returns it above the person sitting or standing there. This creates a protective air curtain.

What could possible further developments of the protective canopy look like?

Norrefeldt: The first demonstrator of the protective canopy was made from standard components that are available on the market virtually off the shelf. For example, the fan, filter, air diffuser and tubes can be ordered from the catalog and were only suitably assembled by our indoor air quality technicians. With further optimization loops and fine-tuning of the components, energy efficiency could be further increased and noise levels reduced at the same time. Work could also be done on the appearance, as we know from previous test subject studies that the appearance of the protective canopy also influences perceived comfort.

What do you think: Will the protective canopy still be present in the workplace in the future – that is, after the hoped-for containment of the pandemic?

Norrefeldt: The original idea of the protective canopy, the so-called climate canopy, actually pursued the approach of increasing thermal comfort locally at the workplace. Here, a slowly trickling stream of cold air was supposed to cool the person underneath – without the risk of drafts. The effect of avoiding mixing with the room air was something we were aware of at the time, but before Covid-19 it was secondary to comfort. If the protective canopy is now extended with a cooling option, for example a cold exchanger connected to the cold water network, it contributes to local cooling of the person, especially in very warm workplaces. Due to the local area of effect, this solution is significantly more energy-efficient than cooling an entire hall. We believe that the new awareness about the transmission pathways of Covid-19 will remain another strong argument for the operation of the climate sky after the pandemic.

Discover more interesting products and exhibitors in the database of virtual.MEDICA 2020: 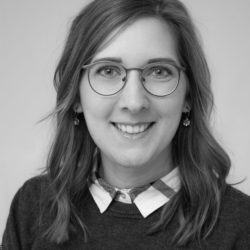