Karl Schwarzenbrunner is the head of the Education and Science Department at the German Ice Hockey Association, and also a speaker at the 8th MEDICA MEDICINE + SPORTS CONFERENCE 2020, which will take place this year on 18 and 19 November in Düsseldorf. 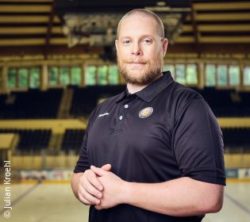 Mr. Schwarzenbrunner, is there a change in sports medicine due to digitalization? And if so, to what extent?

Karl Schwarzenbrunner: Absolutely. Even the systematic video analysis of the causes of injuries - and thus also of injury prevention in the future - is helpful in better understanding mechanics. It is a form of digital application. Additionally, there are other platforms on which all training and game recordings are constantly and immediately accessible to medical staff. The data we receive via wearables and tracking systems is another house number.

You collect a variety of data and use Artificial Intelligence in the evaluation. For sports physicians, the topics of injury prevention, performance and regeneration are particularly relevant. There is a close connection between "remove-from-play" and "return-to-play" decisions. Can you describe to us which data is involved, how you evaluate it and what decisions you derive from it?

Schwarzenbrunner: This is a big topic and here you could write a whole essay. To make a long story short: we always look at objective and subjective data. This is very important for us. In the case of objective data, the external and internal exposure data is collected. For example: accelerations, decelerations, force of a collision in G, sprints, high-intensity meters, in games the time on ice, HRV, live pulse, to mention but a few.

For the subjective data, we work with the KEB questionnaire (KEB stands for German "Kurzskala Erholung und Beanspruchung", meaning short scale recovery and stress), an adapted BORG scale (measures subjective stress perception) for training stress, an explicit query for sleep duration and quality within REGman and REGmon. The REGman project stands for regeneration management in top-class sports, in which scientists have reviewed and significantly expanded the current knowledge on the diagnosis of recovery needs and the state of stress, as well as on the possibilities of promoting regeneration. With the IT solution "Regeneration Management through Athlete Monitoring" (REGmon) developed in the project, individual longitudinal data is collected, processed and analyzed. The project has been realized in close cooperation with competitive athletes, Olympic bases and various top sports associations.

The data from the GET app should also be mentioned with regard to reference values for the decision in case of a suspected concussion. One example is the new trainer version of the GET app, which is aimed specifically at trainers and coaches in team sports - and especially in mass and youth sports. The extension allows for the first time storing baseline values (resting value collected before the season) for an entire team, so that in an emergency it can be accessed immediately and changes detected. Through easy-to-use tests, this app supports athletes, trainers, teachers, physiotherapists, coaches, instructors and parents in the early detection of concussions in sports. Within a few minutes, the possibility of a concussion can be determined. I believe that only from a multitude of data a decision can be made whether, for example, a training session should be stopped for a player, or what is often forgotten, the training should be more intensive. The confidence of a player in the team responsible for his "reintegration" into the training is also an extremely important factor. Because only then will he or she communicate "honestly". This is essential in the case of an injury such as a concussion, as symptoms are often not objectively presentable. The evaluation regarding the re-entry into the training or also training intensities, as well as regeneration still runs with us via the "natural intelligence", i.e. us trainers and medical team, since the data situation is very extensive and the human factor plays a major role for us. Of course, it also depends on how you define AI: Are platforms that communicate with each other already AI?

Where we work with, in my opinion, "real AI" (or better machine learning) is in a game analysis - here we want to cut the game in real time with our tracking system with X/Y coordinates and the autonomous camera system for game analysis. It sounds simple, but it isn't, because there is an incredible amount to consider - besides the game recognition of the own players, the opponent and the puck, parameters for a "line rush" have to be defined and recognized by the system. There's still a lot of work to be done, but it's going in the right direction.

MEDICA MEDICINE + SPORTS CONFERENCE (MMSC) will take place for the 8th time as part of MEDICA from 18 to 19 November 2020 in Düsseldorf. The conference brings together internationally renowned sports physicians, sports scientists, visionaries, physiotherapists, sports technologies and experts for an interdisciplinary dialogue on innovative approaches in prevention, regeneration and rehabilitation in top-class sports and health sports.

A lot of data can be used to determine the condition of a (professional) athlete. Wearables and artificial intelligence help us to make heads or tail sof them and to optimize both performance and safety of the athlete.

Do you see a particular sport in a leading role in terms of the use of data and AI in terms of performance and regeneration? What can the sport of ice hockey learn from this?

Schwarzenbrunner: Football is certainly in the lead for monetary reasons, especially when it comes to data collection. But many other clubs and associations are also doing very well - collecting content is no longer that difficult, but creating context is a big challenge. There are many dedicated- and good coaches, scientists etc. who do just this - in all sports. Therefore, we can learn from all of them. The important thing is the regular exchange of innovations.

Cross your heart. What risks and dangers do you see in correlation with the use of data and AI in competitive sports?

Schwarzenbrunner: Where there is light, there is always shadow. For me, to believe is to believe that knowing something equals knowledge - and losing sight of people (with all their strengths and weaknesses) is one of the greatest dangers. Whatever comes up again and again is that a single value is advertised as "all-encompassing" - this one value or even the "God algorithm" does not exist (yet).

Likewise, the insufficient individualization of metrics when collecting data is - according to me - often questionable. A topic in competitive sports in studies is also the small n. We collect a huge amount of data, but from the same people - whether this still becomes a problem in terms of validity, we will see.

How can mass sports/amateur sports keep up with the new ways, and do you think this makes sense at all?

Schwarzenbrunner: Results from competitive sports will and should also "leak" into mass sports/amateur sports. Technologies are becoming more and more affordable and can therefore also become widely accepted. Here, however, as in competitive sports, it is important not to lose sight of the individual. The enlightenment through science and also in the training of trainers is an important step to ensure that technology is subject to us and that we do not become a slave to it.

What do you expect from the 8th MEDICA MEDICINE + SPORTS CONFERENCE 2020?

Schwarzenbrunner: In one word: exchange. I look forward to it!