Interview with Claudia Grab, Head of the Medical Faculty, Academics and Education Lecturer, University of Ulm

Virtual reality and medicine are increasingly mentioned in the same context. In addition to the development of applications that support the treatment of patients suffering from chronic pain and anxiety, this technology also benefits medical staff. Two months ago, the Ulm University Hospital has opened the VR Lab, where medical students can train and learn with the help of 3D organs. 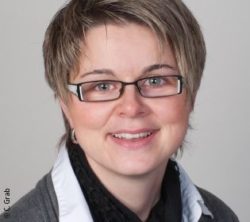 Claudia Grab, Head of the Medical Faculty of the University of Ulm

In this interview with MEDICA-tradefair.com, Claudia Grab describes how the new VR Lab is set up and explains the advantages for students and lecturers in Ulm.

Ms. Grab, how important is virtual reality in education and learning?

Claudia Grab: VR makes learning more fun. It especially helps students with poorer visual-spatial abilities to improve spatial awareness. It’s simply easier to understand complex spatial relationships with the help of virtual reality. It is not meant to be a substitute for real-world learning scenarios, but should only be used as a supplement and to support the course curriculum – most notably in difficult training and learning settings of education.

There are certain environments, especially in the professional life of physicians, where many things tend to happen at the same time. For example, in settings like the OR, delivery room, trauma center or even a helicopter, future doctors first have to learn to effectively keep track of what is happening around them. If they are scheduled to perform surgery, they have to first understand what they need to focus on and at what time. In the real world, this is generally hard to do at first.

For two months now, medical students in Ulm can learn with virtual organs in the VR-Lab.

The University of Ulm now opened the Virtual Reality Lab. What is that?

Grab: At the request of the students, we set up the Virtual Reality Lab and implemented it thanks to the financial support of the studies advisory committee. As part of a teaching project, we converted a study room at the hospital and permanently installed three VR headsets. During study times that are overseen by didactically trained tutors, students can use the VR Lab of their own volition to study – typically in the afternoons or on weekends. Having said that, the idea is to also embed it in curriculum events in the future.

We have an application with the spatial view of the heart for example. We created the model to illustrate various cross-sections of the heart that - although visible in a 2D echocardiogram – are difficult to envision within the structure of the heart. As with ultrasound, the associated structures and functions such as blood flow or oxygen supply are illustrated three-dimensionally. This allows users to actually immerse themselves in the virtual heart.

What accomplishments do you expect to see from medical students that are perhaps not achievable with other methods?

Grab: We expect success not just in situations that require strong spatial intelligence but also in stressful situations where many things happen simultaneously. We want to avoid the leap from the lecture hall into the operating room so to speak. There has to be something that comes in-between. The VR Lab creates a link between theory and practice. Take the example of the mundane act of drawing blood: we usually prefer it, if someone first practices on a simulator before poking us in the arm.

That being said, there are limits to virtual reality as it pertains to knowledge acquisition or theoretical teaching. For example, it’s impossible to take notes at the same time. That's why it only makes sense to illustrate processes or situations where students already have acquired the respective theoretical knowledge.

In the VR-Lab not only the spatial awareness can be improved. It also acts as a link between theory and practice in order to avoid students jumping directly from the lecture hall into the operating theatre.

What is the feedback on the VR Lab so far?

Grab: There has been limited student feedback thus far but that’s because the lecture period has already ended. We won’t be able to fully dive into the VR Lab operation until this coming spring semester. Meanwhile, the Lab is already well received by the lecturers. They consider it an innovative advancement in education. Some lecturers even have their own ideas about other tools the VR Lab should include, with the intention of ultimately integrating this setting into their classes.

What are your next goals for the VR Lab?

Grab: In addition to the heart module, we have also developed and implemented a colon module in the VR Lab. However, we have plans for even more applications. To make this a reality, we are in close communication with local faculty experts. Representatives from the fields of ophthalmology, neurology, and otorhinolaryngology (ENT) have already expressed interest. We are quite surprised by the positive response we have received during this relatively short amount of time.

The interview was conducted by Elena Blume and translated from German by Elena O'Meara.
MEDICA-tradefair.com