MoreGrasp – being able to grasp again with paraplegia

Every year between 250.000 and 500.000 people suffer a spinal cord injury, MoreGrasp is intended to make their lives easier. The project aims to restore the lost gripping function in people with high paraplegia. Researchers at Graz University of Technology have developed a neuroprosthesis that is currently undergoing a feasibility study. 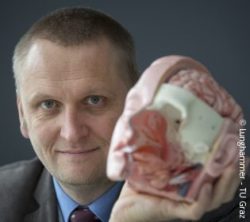 In the interview with MEDICA-tradefair.com Professor Gernot Müller-Putz talks about the neuroprosthesis and the status of the study.

Prof. Gernot Müller-Putz: The neuroprosthesis is aimed at people with high paraplegia who have suffered a loss of gripping function but can still move their elbows. For example, so that they can eat alone again in everyday life, they need a prosthesis that makes this function possible again.

How does the neuroprosthesis work?

Müller-Putz: The neuroprosthesis works with the help of functional electrostimulation. For this purpose, electrodes are attached to certain regions of the forearm. We use a brain-computer interface (BCI) to ensure that the current impulses are sent to the electrodes at the right time. The BCI uses an EEG to measure the brain waves and observes the exact pattern responsible for the gripping function. When the wearer of the neuroprosthesis thinks of grasping, the BCI sends a signal to the stimulator and on to the electrodes. The electrodes then generate electrical impulses to the correct muscle groups and cause them to contract. By specifically applying different muscle groups, a movement of different fingers can be realized and thus also the grasping.

Müller-Putz: MoreGrasp is based on a long cooperation between the University Hospital of Heidelberg and the Technical University of Graz. We have been trying to get such a system up and running since the two-thousanders. This time we have been provided with considerable financial resources and were thus able to take a novel step in brain-computer interfacing in terms of grasping. At first we tried to reach different parts of the body with a control signal, but in this project we only focused on the function of gripping. This enabled us to refine the gripping neuroprosthesis so that the movements are even more precise. In order to be able to move the forearm without the electrodes giving impulses in the wrong places, we integrated rotation compensation. This consists of a series of electrodes and recognizes in which direction the skin moves. In this way, muscle contraction can always be caused in the right places. 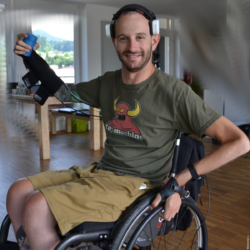 With the help of a neuroprosthesis, the patient holds a can up - he could not perform this movement before.

Since September, a feasibility study on everyday suitability has been taking place. How has the study progressed so far?

Müller-Putz: We now have over 10 volunteers on board. We are currently training the muscles. Since some have already been on board for a year, while others have only been for 2 weeks, the participants are in different stages. Some are already trying to control the real neuroprosthesis with the BCI, and others are still practicing the handling between the BCI and a virtual neuroprosthesis with the help of a computer program.

What do they expect from the study?

Müller-Putz: Since the neuroprosthesis is a research device, we naturally hope that the systems will function as they should. We have already learned a lot. Even at certain points where we expected problems, it worked smoothly afterwards. Such a study is ideal for this. We are also eager to see how satisfied people will be if they can test the neuroprosthesis in everyday life.

To what extent does MoreGrasp enrich the medical technology industry?

Müller-Putz: Since two companies are involved in the project, they have already been able to bring innovations to market. The first is BitBrain Technologies, which developed and launched a new EEG amplifier during the project. On the other hand, we have the company MEDEL from Hamburg, which builds electrostimulators and also took some things from the project with them for their future products.

The interview was conducted by Maxim Abramov.
MEDICA-tradefair.com

Interested parties can register for the study at www.moregrasp.eu. Prof. Gernot Müller-Putz's team will then send an e-mail to get in touch with you. Then a team comes along and carries out a small screening to see whether you would fit into the study.