Here on Earth, all experiments are bound by gravitation. Yet, freed from gravity's grip, tumor cells, for example, behave in an entirely different way. As part of the "Thyroid Cancer Cells in Space" project by the University of Magdeburg, smartphone-sized containers carrying poorly differentiated thyroid cancer cells are sent into space. This experiment aims to deliver new insights into thyroid cancer and support in developing new cancer drugs. 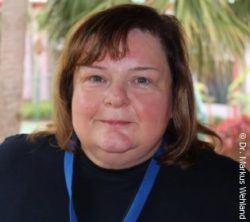 In this interview with MEDICA-tradefair.com, Professor Daniela Grimm explains why her research team is sending cancer cells into space, describes what happens to the cells once they are there and offers a glimpse into future zero gravity projects.

Professor Grimm, why are cancer cells sent into space as part of the "Thyroid Cancer" Cell Box Experiment?

Prof. Daniela Grimm: Back in 2000, we already discovered that cancer cells died due to programmed cell death in a simulated microgravity environment. With the help of a random positioning machine, we obtained thirty percent of apoptotic cells back then. As part of the Shenzhou 8 spacecraft program, a German-Chinese collaboration, we then sent thyroid cancer cells into space in 2011. At that time, we were already able to detect that cells form three-dimensional shapes, so-called spheroids in real microgravity in space. These were malignant, poorly differentiated cells that showed signs of a less aggressive phenotype in space. Interestingly enough, both in space and under conditions of simulated zero gravity, the cells secreted certain proteins we didn’t expect to see based on the starting conditions. This marks the third time that we have launched these types of cells into space, this time to the ISS (International Space Station). Once again, the primary objective is to find growth-regulating proteins and certain receptors that express and secrete differently in space versus on Earth. We subsequently continue to study these proteins in our laboratories by means of cell culture models and biomolecular methods. This is essentially a new approach to finding new cancer treatments. I am a pharmacologist and would like to develop drugs that can be used in future cancer research. What's more, these types of experiments could also partly replace animal testing on Earth in this area in the near future.

The cancer cells are filled into a biocompatible container with culture medium.

Why do you explicitly study thyroid cancer cells?

Grimm: This is a direct result of my training and education. I started to work with thyroid cells when I was a young pathology assistant in Regensburg. Having said that, at this point I am also working with breast cancer cells and other cancer types. I have put a lot of heart and soul into this research.

Based on the subject matter, your project could also be rooted in physics. How important is interdisciplinary collaboration in your project?

Grimm: Interdisciplinary collaboration is crucial. I am a medical scientist, while my colleagues and coworkers are biotechnologists, biologists, chemists and biochemists for example. We have worked together for many years. We also have close industry partnerships. Engineers from Airbus (ADS) assist us in hardware development for instance. Together, we also examined whether the containers we used in this project and in earlier missions are biocompatible with the cancer cells. This is very important because the cells are otherwise unable to grow on these substrates or while they are exposed to the container material. In this context, we also had to assess whether the cells have enough space and at what temperatures they are able to survive.

The research per se is not only interdisciplinary but also very multifaceted and international. After all, we leave the laboratory and fly out into the world. For example, at the Esrange Space Center in the northern part of Sweden, we are working on a TEXUS mission in the laboratories of the Swedish Space Corporation. We are also quite often in Bordeaux-Mérignac in France. Our cells are onboard parabolic flight campaigns in this case. The next campaign is scheduled in late February and early March of this year. 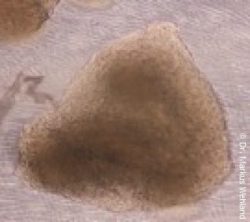 Earlier you mentioned three-dimensional cell cultures. Can you briefly describe what these look like, how they are set up and how they develop?

Grimm: Adherent cells typically form a two-dimensional cell layer in the laboratory. This monolayer grows on the bottom of a culture flask. In space or simulated microgravity settings, individual cells detach after a period of about twelve to twenty hours, depending on the cell type. Initially, these are just individual cells but then there are continuously more and more cells that do so. These detached cells form spherical aggregates. The main difference between them and the structures formed under static 1g conditions is that the space aggregates can become larger, last longer and don’t exhibit necrosis. The major drawback of laboratory experiments is the fact that lab-created cell structures grow well for up to three weeks, then reach a plateau and ultimately die after four or five weeks. The spheroids that we grow in space are perfectly suited to test drugs thanks to their longevity. For example, the aggregates that formed in space in 2011 were five times bigger than lab-created spheroids. On another flight in 2014, there was no spheroid formation because the flight was delayed several times to where we were ultimately forced to send confluent cells into space that formed an extracellular matrix and did not detach. Having said that, we were also able to discover many secretory proteins during this event, which are of interest for further research and drug development.

A variety of factors are responsible for spheroid formation in zero gravity conditions. We know that the epidermal growth factor and the connective tissue growth factor of cells play a role. What’s more, many proteins that are essential for cell adhesion are also heavily involved in this process. We have published our initial findings in the Scientific Reports journal, among others. We also used breast cancer cells for this research.

Are there any other research approaches that use a zero gravity environment?

Grimm: In the coming months, we will take part in the 31st Parabolic Flight Campaign of the German Aerospace Center (Deutsches Zentrum für Luft- und Raumfahrt). We are preparing for further research in Bordeaux-Mérignac during the last week of February. The breast cancer cells will be subjected to thirty-one parabolas during each flight, while we will study early gene expression and cytoskeletal changes under real microgravity conditions. Starting April 15, team members of my working group will also travel to Kiruna in the north of Sweden to study transfected breast cancer cells using a microscope for six minutes in zero gravity conditions.

I am also working at the Aarhus University. As part of this endeavor, a project that focuses on wound healing in space is planned for 2022. The backdrop is that more and more people can be sent into space, thus resulting in increasing skin injuries. We study the wound healing process on an ex vivo skin model. We are currently still in the preparation phase and study wound healing in a simulated zero gravity environment by collaborating with Professor Monica Monici, University of Florence in Italy and Professor Mandred Infanger of the Clinic for Plastic, Aesthetic and Hand Surgery at the Otto von Guericke University Magdeburg. This research could later also be generally applied in regenerative medicine.

The interview was conducted by Julia Unverzagt and translated from German by Elena O'Meara.
MEDICA-tradefair.com