A clean kidney: Break then glue -- MEDICA - World Forum for Medicine
close
back

A clean kidney: Break then glue

Interview with Dr. Ingo Grunwald, biologist, associate of the Fraunhofer Institute for Manufacturing Technology and Advanced Materials IFAM and co-founder of Purenum GmbH

Not enough exercise, an unhealthy diet: Kidney stones develop when urine contains too many insoluble compounds and are now one of the most common diseases worldwide. The ailment annually affects 1.2 million people in Germany alone. The stones are broken up and taken out via endoscopic surgery. Now it’s possible to remove even the tiniest residual fragments. The solution: a biocompatible medical adhesive. 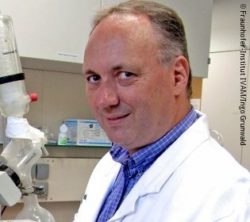 In this MEDICA.de interview, Dr. Grunwald talks about the new adhesive and its marketability and reveals its other possible applications.

Dr. Grunwald, the GO-Bio project "mediNiK" has successfully developed a medical adhesive for the effective removal of residual kidney stone fragments. What type of adhesive is this?

Dr. Ingo Grunwald: The abbreviation stands for "medical kidney stone adhesive" (German: Medizinischer Nierensteinklebstoff). It is a plant-based sugar polymer, which is commonly known as a food additive. This was in turn used to produce a hydrogel system that can be used to remove residual kidney stone fragments.

Kidney stones have always been removed by using endoscopic laser or shock wave lithotripsy. How exactly is the adhesive used?

Grunwald: These therapies are still being used. And that's a good thing. This is the procedure: During ureterorenoscopy, the doctor inserts an endoscope through the urinary tract to find the kidney stones. If a stone is too big in size (> 5mm), it must be broken up before removal. Whenever possible, any residual fragments are removed from the kidney with an extractor tool, although it is definitely possible that tiny residual fragments stay behind because the doctor is unable to take them out. They are simply too small to be gripped with conventional extractor tools. An urologist experienced this issue and called me. He wondered if there is a system that might solve this problem. The list of requirements for it was long: it has to harden underwater, must be quick to use and biocompatible, and it should not stick to the extractor tools – unfortunately, this wasn’t something that was available off-the-shelf.

We subsequently developed a project and created a two-component system: The doctor uses the same instruments. Using a catheter, he/she can inject the first components and coat the kidney stones. The second component is then added via another small catheter. A hydrogel forms within a few seconds, which safely embeds the stones.

What are the benefits of this adhesive?

Grunwald: MediNiK complements the procedure and enables the physician to remove the smallest fragments from the kidney, which he/she would otherwise be unable to grab. This wasn’t an option before now.

The system is easy to use, biocompatible, well tolerated and not cytotoxic. It works underwater, which is not the case with most other adhesives. But it has to be in this case because the kidneys are constantly flushing substances. Another benefit: The doctor does not have to change things around to use the adhesive. He/she can use the usual instruments and tools. The procedure only takes between 10 and 15 minutes.

Who is part of this project?

Grunwald: We started out with six to eight people. The University Medical Center Freiburg supported us from a medical perspective. We also needed someone who is familiar with the economic aspects. My colleague Manfred Peschka took on this responsibility. We co-founded the Purenum GmbH Company – the name is loosely based on the Latin for clean kidney. 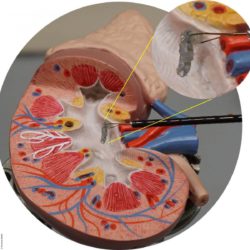 Kidney stones, embedded by using the mediNiK system & removed with an extractor tool in front of a kidney model (3B Scientific).

The adhesive was developed as part of the GO-Bio project. What is this project about?

Grunwald: We have been part of the GO-Bio project "mediNiK" for several years. This is a research initiative of the German Federal Ministry of Education and Research (BMBF), which supports projects in the field of medicine, medical technology and biotechnology that have market potential. We are among the seven projects that were successful in the 2014 selection round. This BMBF funding initiative includes excellent support from Project Management Jülich (PTJ), Berlin office, Biotechnology Startup Initiative). There are two project phases. The first phase is very research-based, while the second phase focuses on developing a marketable product.

At this point, we have found investors who support the further development of the medical adhesive. This shows that we can fund the project - an essential component of the second project phase. The system is already patented for Europe. We are still working on getting patents in the U.S., China, and other countries.

What does the development of this type of biocompatible adhesive mean in terms of medical technology advancements?

Grunwald: Collecting small residual kidney stone fragments, stopping bleeding, or bonding bone splinters: adhesives for use inside the body essentially all share the same goal. They are designed to support a patient’s well-being because they are minimally invasive and don’t require extensive follow-up care. What’s more, their use is generally more pleasant for patients.

Do you see other applications of this type of adhesive?

Grunwald: There is an incredible number of uses for medical adhesives inside the body. When it comes to our specific biocompatible medical adhesive, we have also considered a gallstone-related application. However, we have not pursued this avenue yet. We also had some moments where synthetic types of the adhesive formed a very strong bond, making them candidates for the treatment of bone fractures.

The interview was conducted by Katja Laska and translated by Elena OMeara.
MEDICA-tradefair.com

Sonography, hygiene, telemedicine in practice, the preparation of hospitals for special damage situations - these are just some of the topics that will be the focus of MEDICA ACADEMY 2018. The training event offers physicians and medical specialists the perfect opportunity for further training and will take place over four days at the CCD Congress Center Düsseldorf / CCD Süd - parallel to the world's leading trade fair for medical technology, MEDICA.

Courses are also offered in the field of nephrology.

The program will be held in german.