Radiation therapies are an essential component of today's oncology because they enable the treatment of localized tumors. Yet they have one major drawback: radiation damages not just tumor cells but also healthy tissue. One solution to solve this problem could be proton minibeam therapy, which uses finely focused beams. 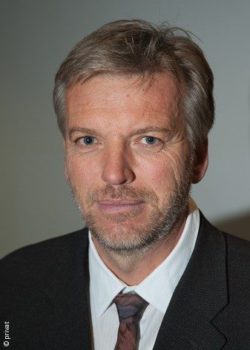 In this interview with MEDICA-tradefair.com, Günther Dollinger talks about the benefits of proton radiation therapy and what makes it different from X-ray therapy, and he explains how minibeams could enhance the radiation of tumors.

Prof. Dollinger, how does the proton minibeam therapy you developed actually work?

Prof. Günther Dollinger: Minibeam therapy is based on conventional proton radiation therapy, which is increasingly used in cancer treatment. In the case of minibeam therapy, the proton beams are focused to where their diameter is reduced well below one millimeter. These beams are applied at regular intervals of a few millimeters, thus leaving non-irradiated tissue in between. The beams expand to the tumor, resulting in the desired healing effect known from conventional therapy. This reduces side effects because the beams cause less harm to nearby healthy tissue, while they are en route to the tumor site.

For comparison purposes: in conventional therapy, beams measure approximately five millimeters in diameter and are juxtaposed point by point. Meanwhile, the input parameter of the beams changes in minibeam therapy. This reduces side effects, which we have also now proven in initial experiments.

What are the side effects of proton therapy?

Dollinger: As is the case with any ionizing radiation, cells are inactivated, meaning they are no longer able to divide. This leads to inflammatory-type responses that represent an acute side effect. Common long-term side effects are fibroses or secondary cancer indications. However, these side effects always accompany external radiation therapy. This also applies to X-ray therapy.

What is the difference between proton therapy and X-ray therapy?

Dollinger: Proton beams reach a defined area within the tissue, which we can control via the proton energy. This allows medical professionals to better adjust the dose at the treatment site and apply the highest dose, that being the highest ionizing and therefore the dose with the most destructive effect on cells, right at the tumor. Compared to X-ray radiation, protons leave less energy behind in healthy tissue en route to the tumor site, thus causing far fewer side effects in the process.

This is why experts also want to increasingly switch over to proton beam therapy, though this is made difficult due to comparatively higher costs.

Linear accelerators like this one are not able to produce finely focused beams yet. Günther Dollinger and his team want to develop a device that is able to; ©panthermedia.net/ Thomas Hecker

What happens in the tumor when it is targeted by proton beams?

Dollinger: Proton beam therapy is meant to inactivate all cells if possible so that the tumor is unable to continue to grow. Even though the radiation already destroys several cells directly, most of them persist initially and are only gradually being absorbed by the body. That is why it may take several months until the body completely breaks down and eliminates the tumor.

As you mentioned earlier, you have successfully completed initial experiments using minibeam therapy. What are your plans for further developments?

Dollinger: We are still a long way away from treating patients with this particular therapy and are currently only in preclinical trials. That means we are trying to tease out the advantages by conducting experiments with small animals and determine whether the process might also have any drawbacks.

We are also planning to build a dedicated particle accelerator since it is a very sophisticated technological process to create these ultra-fine proton beams. It is impossible to do with the existing units. This is going to be our next step, once we have completed these pretests.