Many diseases can be treated successfully if they are diagnosed early. Research into a “digital (electronic) nose” is one promising development to facilitate early detection and diagnosis. That’s because body odors and their molecular composition are an early indicator of various diseases that often remain undetected in the early stages. 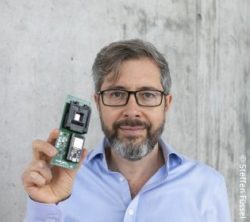 In this MEDICA.de interview, Professor Gianaurelio Cuniberti describes the possibilities the digitization of the sense of smell opens for diagnostics and explains how the technology could work.

Prof. Gianaurelio Cuniberti: Hydrogen breath tests and C 13 urea breath tests are used to diagnose gastrointestinal conditions. They can detect lactose and fructose intolerances or bacterial overgrowth of the small intestine, for example. These tests measure the amount of certain gases in the breath you exhale. With small intestinal bacterial overgrowth (SIBO), the body generates elevated levels of molecular hydrogen, which can be measured via this method. This has been a routine measurement method in gastroenterology for many years, but many hospitals and clinical centers no longer implemented it because of COVID-19.

As part of the SMELLODI project (Smart Electronic Olfaction for Body Odor Diagnostics), we are researching the measurement of gas mixtures with even significantly lower concentrations of the individual components since there is no device that can digitally monitor body odors at this juncture. We know trained dogs can detect cancer and other diseases by smell and body odors. This process can be mimicked and is now also becoming a reality in the digital world: while some animals have heightened and selective olfactory senses, research in recent years has shown that this is also possible with electronic noses (e-noses) that are based on nanomaterials.

What are the difficulties when it comes to the digitization of body odors?

Cuniberti: Until recently, the measurement technology was not sufficiently developed, which made things more challenging. Only in the past five years, nanomaterials research has made major progress in this area, and only as it pertains to the laboratory for the time being. In addition, smells are far more complex than colors, for example. When it comes to colors, red, yellow, and blue are the three primary colors (RGB) from which all the other colors are derived. In contrast, a smell is based on multiple odor molecules that trigger a composite response in the nervous system via receptors in the nose, which our brain then decodes and analyzes for us. The binding of odor molecules initiates an electrical signal. Each smell affects the nervous system differently. Humans have 350 olfactory receptors, and the combined electrical signals allow us to distinguish among 10,000 or more smells. While we can collect the respective data on human senses, it won’t help us digitize body odors unless we have the right devices that can perform comparable analyses.

This is where artificial intelligence (AI) comes into play and opens new research possibilities for us. For example, ten years from now, sensors and AI in mobile phones might enable us to analyze and interpret breath at the molecular level. It would facilitate personal diagnostics pertaining to potential health risks or permit dietary recommendations anytime, anywhere.

How can the digitization of body odors be advanced for health monitoring?

Cuniberti: We are honing two areas that jointly enable the digitization of body odors. This refers to the nanomaterials and the AI ​​algorithms that increase the selectivity and sensitivity of our sensor technology when combined. Both must be studied concurrently since one area alone won’t be enough. The collected odor data must be read out. Nanomaterials bridge the gap between smell and data. We are developing a combined chip as a "digitized nose", which comprises various microelectronic components for signal acquisition and analysis.

Body odors and their molecular composition are an early indicator of various diseases that often remain undetected in the early stages.

What are possible diagnostic applications for digital olfaction?

Cuniberti: When people suffer from acute insulin deficiency or have prediabetes, the skin produces a body odor that smells of alcohol. This is owing to the acetone in the sweat, which can be an early sign of impending diabetes. Not everyone will instantly recognize the smell, but a “digital nose” could be programmed with high sensitivity to identify the odor.

Early detection would also enable us to start preventive care for various diseases. A case from Scotland shows a possible scenario: A man suffering from Parkinson's disease and his wife attended a self-help group. During one meeting, the wife noted that seven years ago, her husband had already started to smell just like the other Parkinson's patients in the self-help group. However, he was only diagnosed with Parkinson’s disease two years ago, five years after his wife first noticed the change in body odor. People like her are called "super smellers". Researchers subsequently identified the five molecules linked to the change in body odor in Parkinson's patients. This is a great example that illustrates our research objective: In the best-case scenario, we use artificial intelligence combined with digital olfaction to facilitate detection and diagnosis at a much earlier stage. 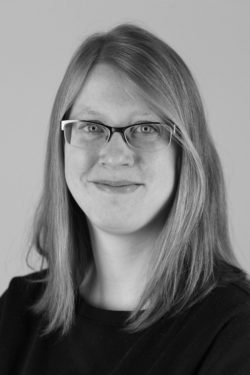 The interview was conducted by Melanie Prüser and translated from German by Elena O'Meara.
MEDICA-tradefair.com