Atrial fibrillation often causes no symptoms for those affected, yet it affects around 30 million people worldwide. Undetected and untreated, atrial fibrillation can lead to strokes. According to a study, a mobile rhythm patch can help detect and prevent strokes. 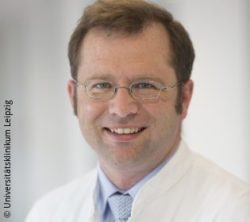 In this interview with MEDICA-tradefair.com, co-study leader Prof. Rolf Wachter explains how the mobile rhythm patch works and which insights the study results provide for the future.

Professor Wachter, who developed the patch?

Prof. Rolf Wachter:  The wearable patch is a medical device that is already on the market. It was developed by iRhythm Technologies and is sold in North America and Canada. It is not yet available in Germany because it is not covered and paid for by our health insurance providers. However, it has received the CE Mark and has been approved in the UK (even before BREXIT).

How do you apply the patch?

Wachter: The patch monitor looks like an extra-large adhesive bandage and is adhered to the patient’s chest for up to 2 weeks. The built-in ECG monitor facilitates continuous ECG readings while the patch is worn. Patients can also press a tiny button if they feel any unusual symptoms at any time – prompting the monitor to earmark this specific section. After the two-week wear time is over, the patch is removed and sent in for heart data analysis. The physician receives a full report on the patient’s heartbeat during the 2-week timeframe, providing information on heart rhythm disturbances or stops, the average heart rate, etc.

Let’s take North America as an example: Is the patch applied there by a physician or is it also available for self-application?

Wachter: The patch can be either applied by medical staff or you can take it home and apply it yourself. It’s not that hard. If you can apply an adhesive bandage, you can also put this patch on. There are instructions on how to best apply the patch. The worst that could happen is you apply it to your back where the ECG signal is weaker. So yes, you can self-apply the patch.

How does the data analysis work?

Wachter: The patch is removed and sent in. The company has an analysis center with staff that is trained in ECG interpretation. The treating physician subsequently gets a detailed report sent via e-mail.

Products and exhibitors from the area of mobile IT

Discover more interesting products and exhibitors in the database of virtual.MEDICA 2020:

An ECG recording unit is integrated into the rhythm patch, which continuously records the heartbeat for a fortnight.

How was the study conducted?

Wachter: Here is the background of the study: Atrial fibrillation is the most common type of sustained heart arrhythmia. We know that people with atrial fibrillation have a 3 to 5 times greater risk for ischemic stroke. We often see patients who are admitted to hospital for stroke, at which point they find out they also have undiagnosed atrial fibrillation. Had you known this beforehand, the patients could have been treated with anticoagulants, often called blood thinners and stroke could have possibly been prevented.

This gave rise to the idea of systematic screening to detect atrial fibrillation at a certain age since atrial fibrillation prevalence increases with age. The first step of this type of screening would be to determine the incidence of atrial fibrillation in patients with certain risk factors.  We did this in this study: In a randomized controlled trial, we divided 856 participants with high blood pressure aged 75 and over into two groups. The first group received the cardiac patch, while the participants of the second group received standard treatment – meaning the patients received standard medical care by their family physician. The latter typically asks his/her patients how they feel, measures the blood pressure, takes the pulse, and performs an ECG if necessary, but there is generally no additional heart rhythm monitoring.

What does the patch and your findings mean for future research on heart health?

Wachter: Here is the status quo in Germany: We do not have any cardiovascular disease screenings on a larger scale at the moment. That is why I think our study shows that it is important to detect atrial fibrillation before it causes a stroke. After all, our study reveals that one out of every 21 persons in this specific experimental group have atrial fibrillation.

Further studies are needed to find out whether treatment of these patients actually prevents strokes. What is the benefit-risk assessment – since blood thinners slow the clotting of blood, how many patients may experience unwanted and sometimes dangerous bleeding? Subsequent studies must address these and other important unanswered research questions. These studies must also be conducted on a much larger scale and include participants in the five-digit to six-digit numbers. It is also likely that we must jointly assess several studies to answer these questions.

Yet for a start, our study proves that an early detection approach works and has no side effects since the patch was well tolerated by everyone. We also detected that atrial fibrillation is more common than previously expected. Our next step is to find out if specific blood tests can be a better way to predict atrial fibrillation – we are currently working on analyzing these questions.

The interview was conducted by Kyra Molinari and translated from German by Elena O'Meara.
MEDICA-tradefair.com